On the 25th of October, 1865 the first meeting of the foundation committee for a Mechanics Institute in Romsey was held.  The Romsey Mechanics Institute (RMI) was formally proposed in 1868 and in 1870 the committee received a government grant. The CoM is in possession of the minutes from this 1st meeting and all subsequent meetings. These minutes have been digitised by the Mechanics Institutes Victoria (MIV). The RMI is now in its 3rd century of use by the community of Romsey and the surrounding districts.

In 1875 the foundation stone for the 1st Romsey Mechanics Institute was laid and a wooden building was erected at a cost of two hundred pounds. This building comprised a hall with a large stage, capable of seating 250 people, and two other rooms, one of which was a Library for the education and enjoyment of the local community.

In 1884 work began on a new, more spacious hall in front of the above building at a cost of one-thousand, two hundred pounds. Local landowner and baronet, Sir William Clarke laid the foundation stone on 29th May 1884.

The hall quickly became the social hub of Romsey, with most entertainments held there. As well as providing the library service the Institute’s rooms were used for numerous meetings by local groups. Over the following years the main hall of the Institute conducted a wide variety of events as diverse as theatre and weekly balls to roller-skating and boxing.

On the 6th of July, 1904 a fire caused serious damage to the wooden structures of the building and much of the Institute was re-built and enlarged to its present size. Once again the Institute became the social focal point of the greater Romsey area with the usual dances, balls, theatre and the new craze “the picture show man”. Later the northern upstairs room was divided to provide a projection room and moving pictures became a regular weekly occurrence (even today you can see running sheets of some of the 1930s and 1940s talkies pencilled on the walls in the projection room). 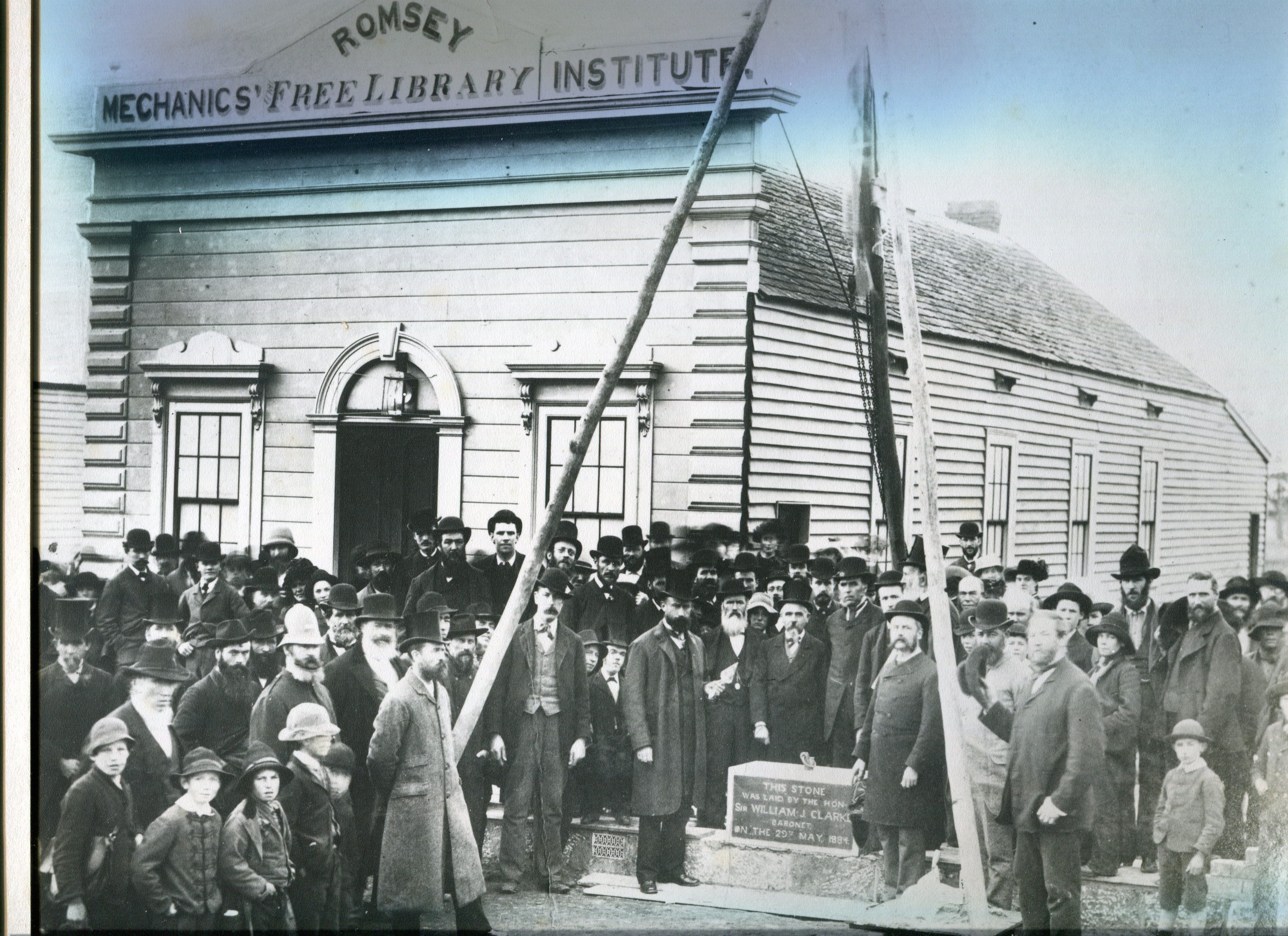 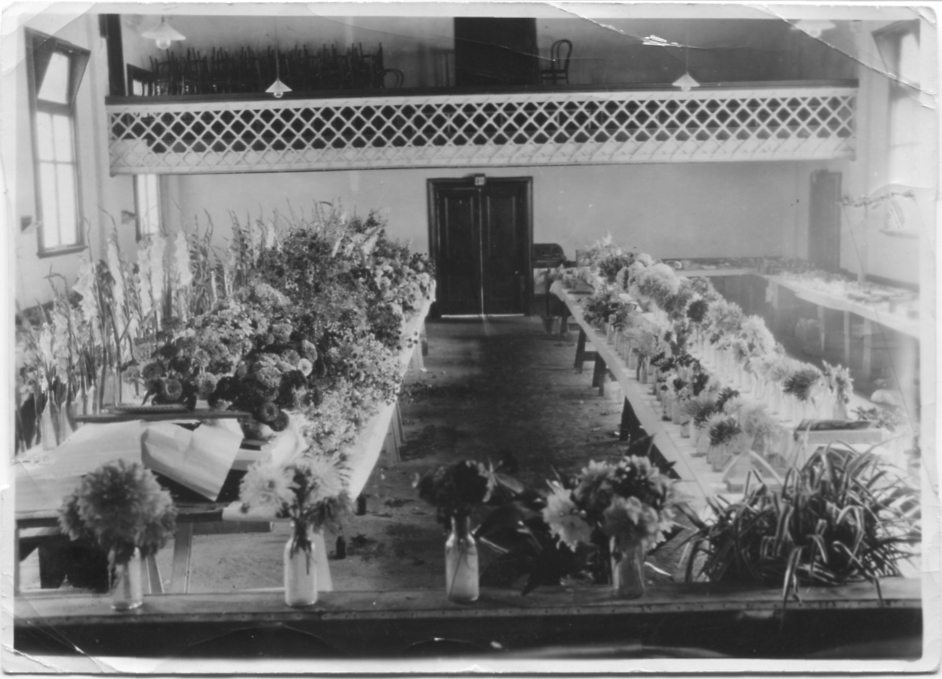 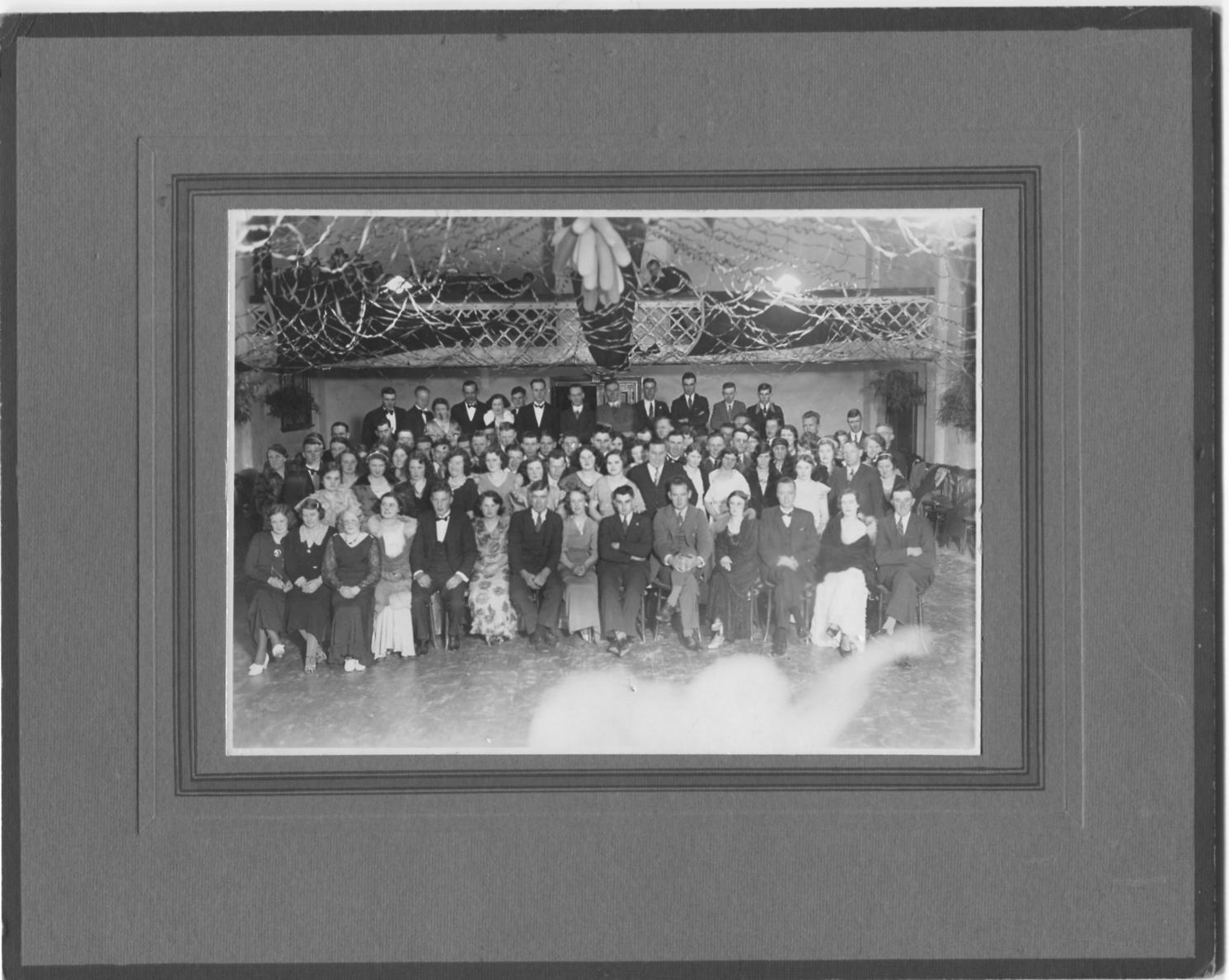 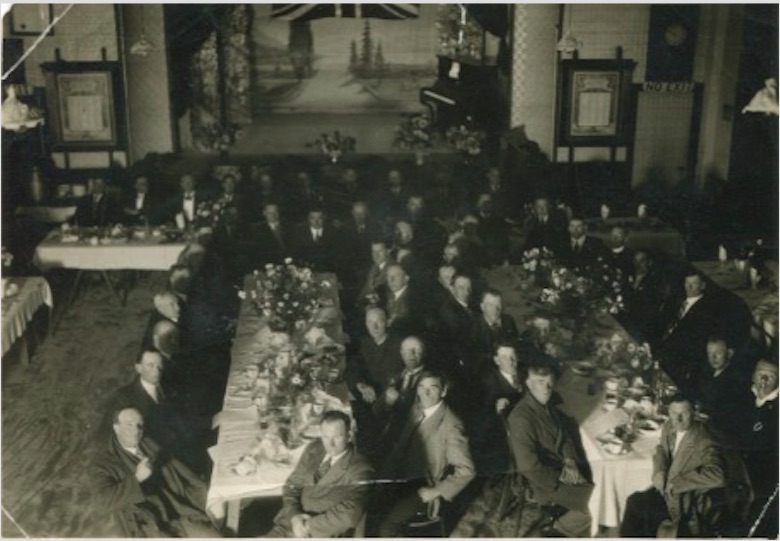 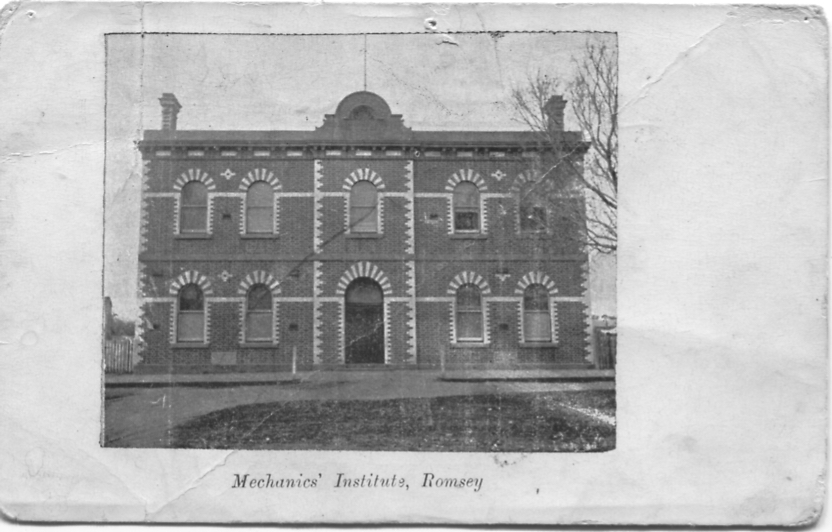 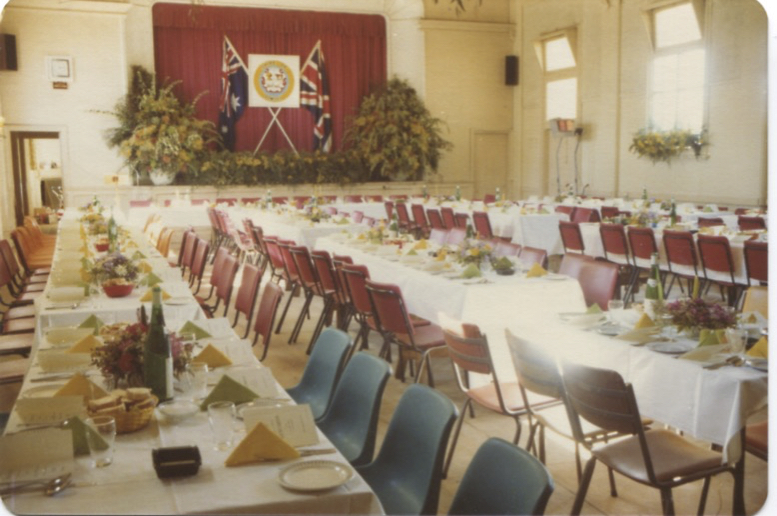 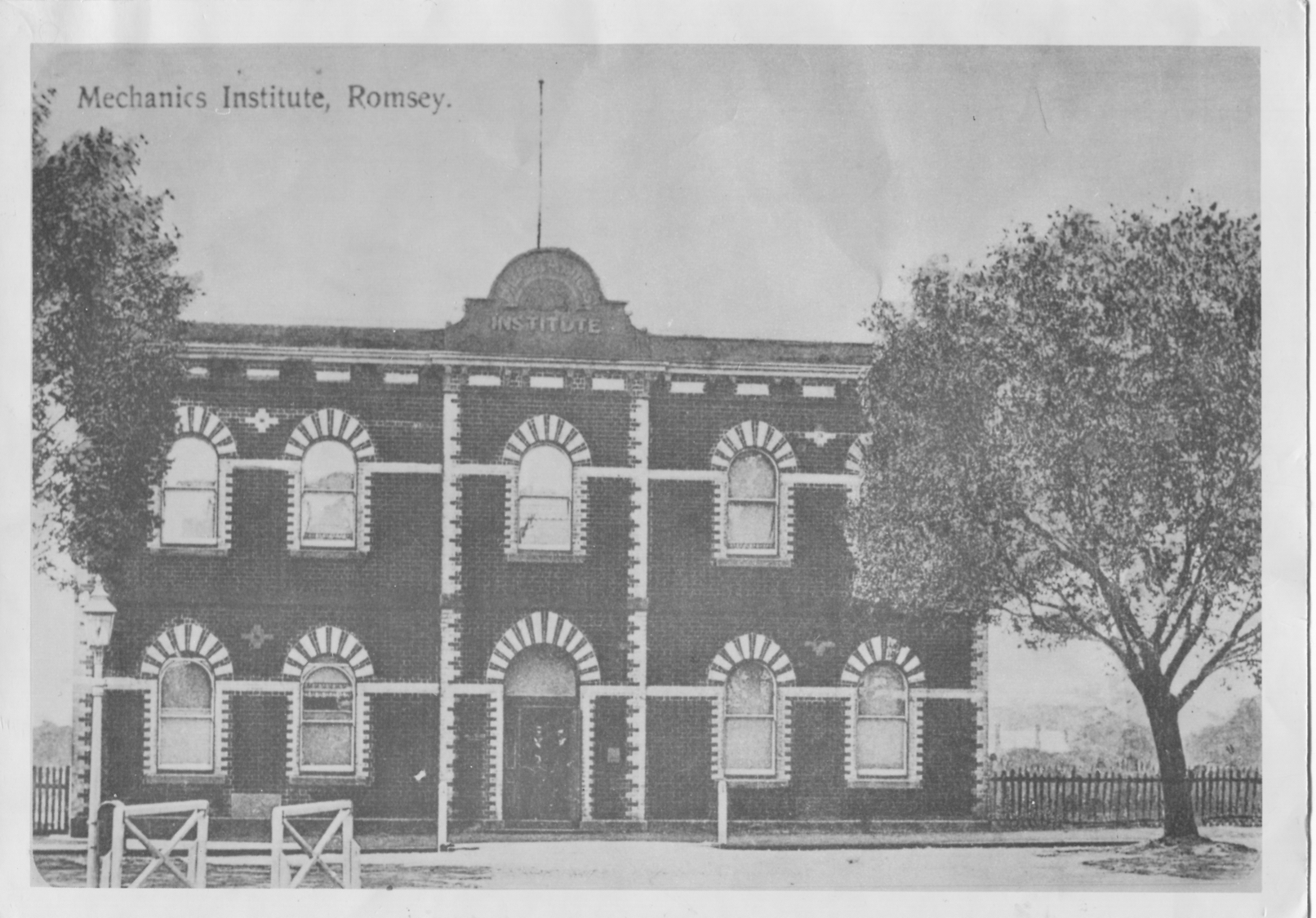 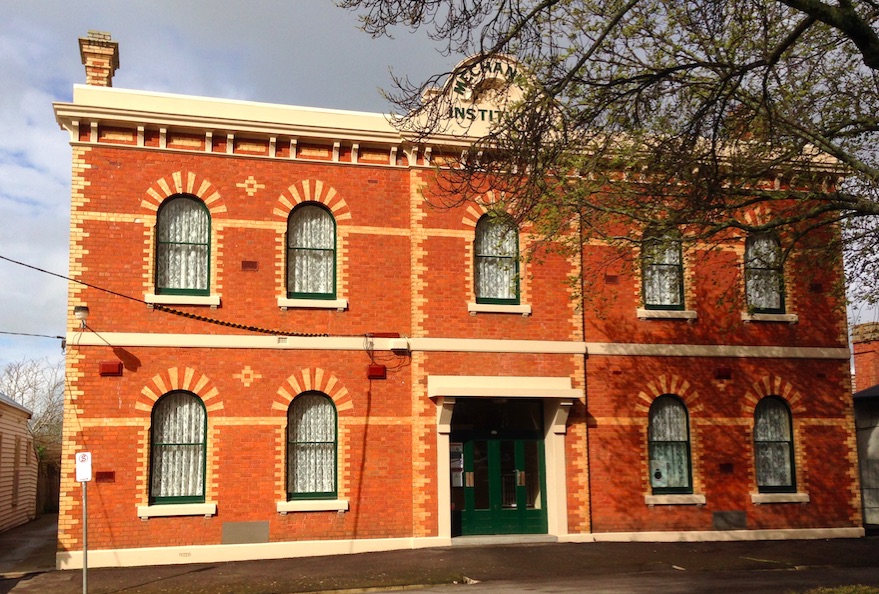 Due to the rising costs of both new books and maintenance of the collection, the Library was closed down during the 1970s. The then Shire of Romsey worked with the Bendigo/Goldfields Library to introduced a weekly Mobile Library to the town. This library van also visited Romsey Primary School and many of the surrounding rural schools.

Until the late 1970s early 1980s the Institute was the centre of community events, the majority of weddings, presentation nights, school concerts, art shows etc were held here. Up to that time the hall was also a fully functioning cinema and theatre with a properly lit stage, ticket box, changing rooms, green room and dress circle. The RMI was the classic Australian country hall, the centre of the community and its functions.

The kitchen was designed to cater for all previous events and for the privatised “Meals on Wheels” community service. This service is now moving back to community based providers and the Institute may again be involved in this activity.

The building has been a functioning community asset and Mechanics Institute for well over 100 years. It is an impressive building, located on the main street of the town and it is the only building in the town, excluding churches, that is still used for the purpose for which it was originally constructed. 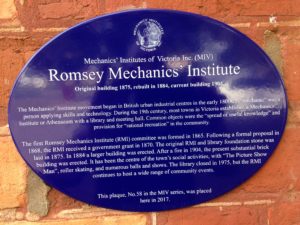 We would like to thank the Romsey/Lancefield Historical Society for some of the pictures on the RMI website.

There are no current public events planned, please see the User Groups page for information on groups that use the facility on a regular basis.